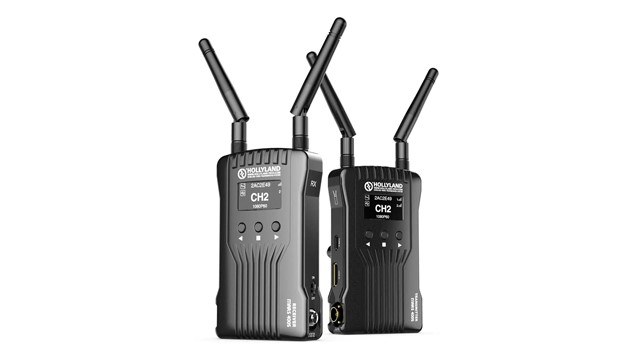 The Mars 400S from Hollyland is an entry-level1080p60 transmitter/receiver system featuring a 400' line-of-sight transmission range. In a compact design, the transmitter & receiver each have an SDI & HDMI connection.

Additionally, an optional second receiver can be linked up to the transmitter to accept the signal at the same time. The transmitter is also a capable of sending the signal over built-in Wi-Fi to u to four mobile devices, whether it is also sending to a receiver at the time or not This will allow different people/departments on the set to view the image being captured. The imagine is sent to the HollyView app, which is compatible with iOS & Android.

Both the transmitter & receiver have a built-in L-series battery plate & also support DC power. Both units also have an OLED display that confirms the resolution, transmission channel, signal strength and other details. The display also shoes a low battery warning when there are about 30 minutes of runtime left.

One of the features of the Mars 400 system is a channel scan function. Via the OLED display, you can see the status of each selectable transmission channel in the environment you're in. This feature lets you know which channels are good & which have interference. Another feature is scene mode selection, which allows you to select from three different scene modes as best suits between video quality, low latency, or balance between the two.

Our hiring process is easy! Please follow the steps below.

Step 6:Insurance & ID: To ensure both the Hirer & Urban Cine are protected; a 4% insurance levy is applied. 100 points of ID is to be presented for new customers. You will receive a New Customer Form to complete.

Step 7:Payment: For new customers payment is required prior or on collection. If you have a history with Urban Cine a credit account may offered.

Step 8:Using Equipment: It’s fair & reasonable to expect the hirer has the skillset to use equipment in a respectful & professional manner.