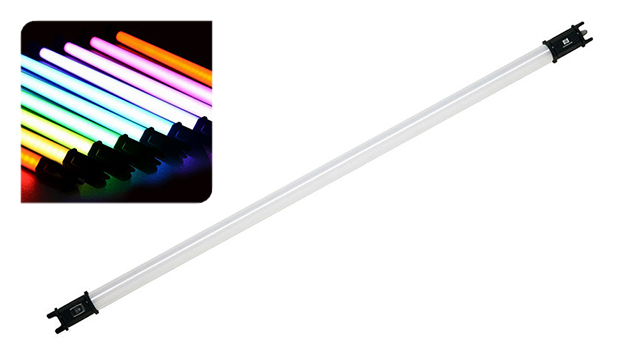 The 30C PavoTube employs RGB+W LEDs that not only enable colour temperatures of 2700 to 6500K, but has hue & saturation control giving you access to literally millions of colour combinations. The tube also has pre-programmed colour effects such as Storm, Flash, Candlelight, & Colour Cycle. The fixture's TLCI rating of 93 is proof of notable & precise rendition of colour. Light intensity is variable from 0 to 100% & while you can make these adjustments locally on the light, Wi-Fi compatibility means that you can also do it wirelessly.

PavoTube's are AC/DC. The included 100 to 240v AC adapter allows you to use it worldwide, but it will also run for up to 2.2 hours at full power using its two built-in 2200 mAh batteries. The intelligently designed fixture also has octagonal ends, allowing it to be placed on a surface at the specific angle to meet your lighting design. The only thing better than a PavoTube 30C is several of them. NanLite has that covered with the inclusion of a sync cord to connect to another light or several of them with additional cords. Using the first light in the chain as a master, you can synchronize the effects of all the lights simultaneously.