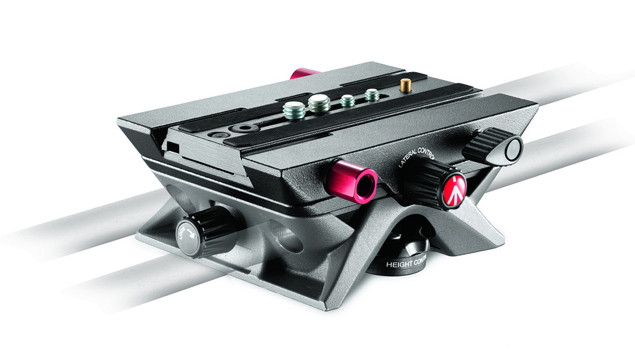 At the heart of Manfrotto's SYMPLA system is the Plate, which attaches your camera to the SYMPLA rig. The Variable Plate allows the camera & lens to be moved on three independent axes (longitudinal, lateral & vertical), a flexibility that's essential for aligning multiple camera & lens combinations with critical components like a Matte-Box or for positioning the camera viewfinder in front of your eye.

Adjustment controls are simple: longitudinally, the Variable Plate slides along SYMPLA rods & is unlocked/locked with one repositionable ratchet lever. For vertical adjustment, a single geared dial on the side of the Plate gives fingertip control; the Plate maintains its height when the dial is released, with a ratchet lever to lock the camera vertically. For lateral adjustment a single geared dial at the end of the Plate adjusts the offset of the camera from the Plate's central axis, & a single lever locks down the movement.