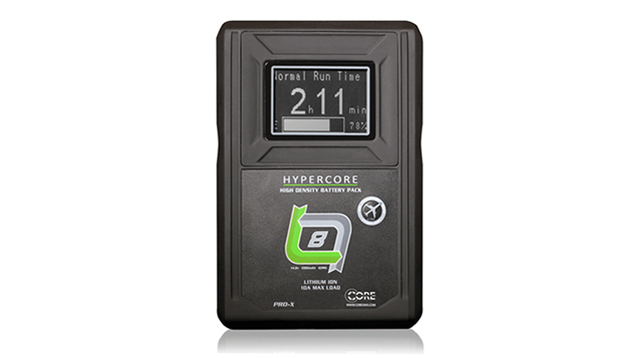 The HyperCore SLIM series was developed to provide the best in Lithium Iontechnology for UAV, Handheld Gimbal & all other applications demanding a low-profile battery pack. CORE transformed the SLIM HC7’s into a work of art with the new HC8 battery packs. From a more angular design, to a new low profile LCD bezel, the HC8’s offer the most compact, slim, & sleek design in the industry today. The Hypercore SLIM series is the first line of slim battery packs capable of handling high draws up to 148w (10A) without deterioration in service life nor operability, perfect for powering cameras ranging from RED to ARRI.

The LCD on this battery pack features Core SWX’ new next-gen, ultra clear, white LED backlit screen. The large multipurpose, runtime LCD informs you how much time you have left when in use (in hours & minutes), gives you an estimation based on a dummy load of 30w (when in standby), & also acts as a charge indicator by computing remaining charge when on a charger. For ENG cameramen, there is also a 4-stage LED display on the side of the battery.

Since Lithium Ion transport & travel are one of CORE's utmost concerns, this durable, 85WH V-Mount battery pack falls within the range of accepted capacity for air travel. The HyperCore series delivers the most value & ROI for those who require battery packs to stand the test of time and deliver unrivalled performance.

The battery cells are in-cased in an over moulded, rubberized housing, consistent with all Core SWX’ battery packs for nearly 8 years. The case provides additional protection against accidental impacts; & the rubber texture reduces the chance of the battery slipping out of your hands.

As with all Core SWX brick battery offerings, the HyperCore series have an integrated, unregulated P-Tap connection on the side of the battery allowing you to power any device accepting 12-16.8vdc.

Any charger within Core SWX’ charger line-up will charge HyperCore, but the battery series is also the most cross platform, charger-compatible in the industry today. The V-Mount offerings (HC8S & HC8R) will also charge on REDTM, IDXTM & SonyTM, allowing you to maximize service life out of your current charger.